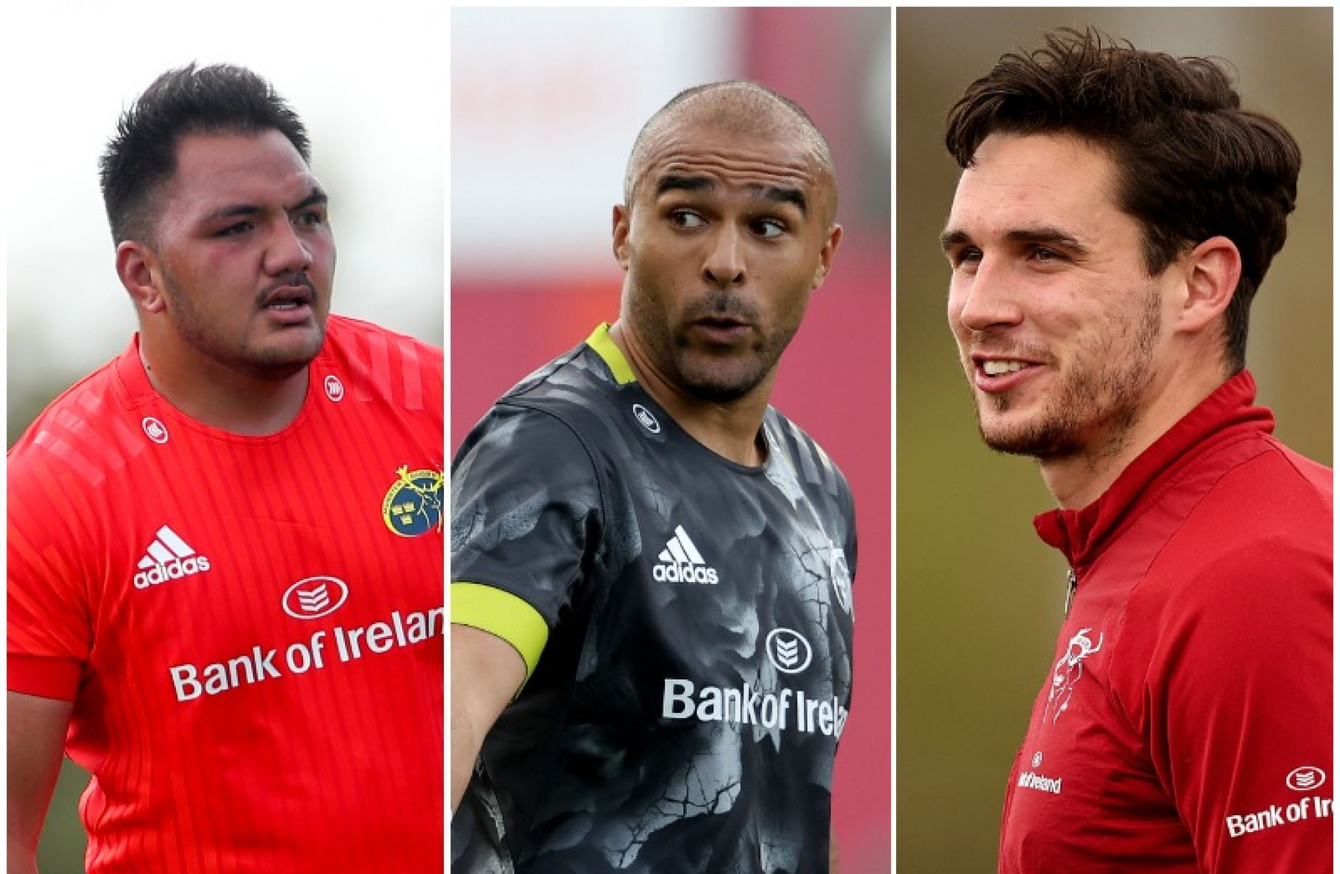 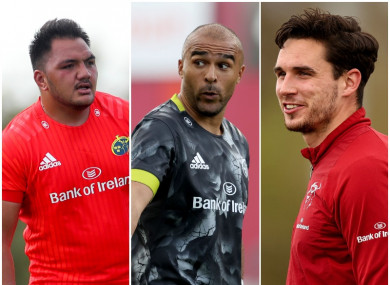 THE START OF the Irish provinces’ 2021/22 season is just two weekends away and it promises to be a busy one as the new United Rugby Championship launches.

Munster will be aiming for trophy success after reaching last season’s Pro14 final, where they lost to Leinster, and exiting the Champions Cup at the round-of-16 stage after a home defeat against Toulouse.

In the first of a four-part series looking at each province’s depth ahead of the new campaign, we examine Munster boss Johann van Graan’s 48-man squad.

Included in brackets after each player’s name is their age and number of Munster caps in the format [age, caps]. Players have been listed in the order of their number of caps. 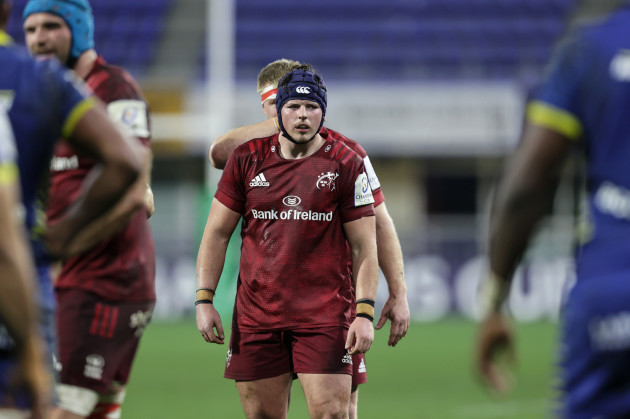 The big change in this depth chart has been the departure of the experienced James Cronin, whose contract was not extended, leading to his move to Biarritz.

Munster are banking on 26-year-old pair Jeremy Loughman and Liam O’Connor stepping up to a greater degree, while there is also lots of excitement about the potential of 22-year-old Josh Wycherley, who had a standout performance in last season’s European win away to Clermont.

His dynamism could help Munster towards developing a more explosive front five unit – which is a big project for the province – but Dave Kilcoyne remains the obvious first-choice in this position.

Former Ireland U20 international James French has also advanced from the academy for this season but has yet to make his senior debut. 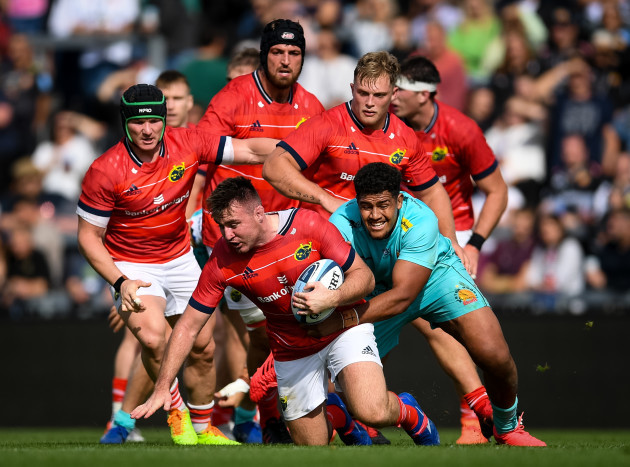 Rhys Marshall’s move home to New Zealand meant Munster had been left with only three senior hookers, but the Irish-qualified Declan Moore recently arrived from Australia on a one-year deal to provide another option in the position.

Moore has mainly played club rugby in Sydney and is an unproven, affordable addition.

Kevin O’Byrne – who is currently injured – was excellent for Munster last season but Niall Scannell remained first-choice at number two for the biggest games. Scannell hasn’t been able to force his way back into the Ireland mix, however, with his last Test cap coming at the 2019 World Cup.

23-year-old Diarmuid Barron added six Munster appearances to his CV last season but has still only started once for the province. Marshall’s exit means he should gain further exposure in 2021/22.

Meanwhile, academy hooker Scott Buckley is rated as a strong prospect by the province, while Ireland U20 international Ronan Loughnane is also set to join their academy. 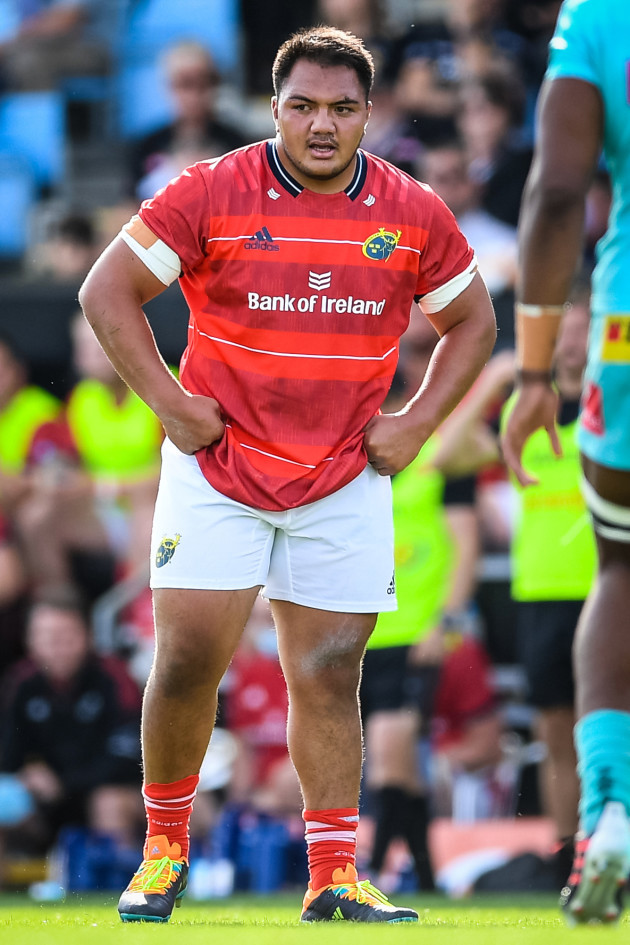 There has been no change to Munster’s four senior squad tighthead options over the summer, with the veteran pair of Stephen Archer and John Ryan having continued their roles as the frontline duo in the matchday 23 for the biggest games last season.

Ryan worked his way back into the Ireland set-up in the 2020/21 campaign and was capped as recently as July, underlining that he’s far from ready to make way for younger players. The same goes for Archer, who has more Munster caps than anyone else in this squad.

However, Munster will be hoping to see young tighthead pair Keynan Knox and Roman Salanoa pushing Archer and Ryan far harder in the upcoming campaign.

23-year-old Salanoa is an extremely powerful athlete but had a number of frustrating injury niggles last season, meaning he has yet to start a game for Munster. Knox has four starts to his name and has shown promise.

Salanoa and Knox both appear to have the potential to be the kind of mobile, explosive tight five players Munster need but the reality is that neither of them has yet played in a Champions Cup game. 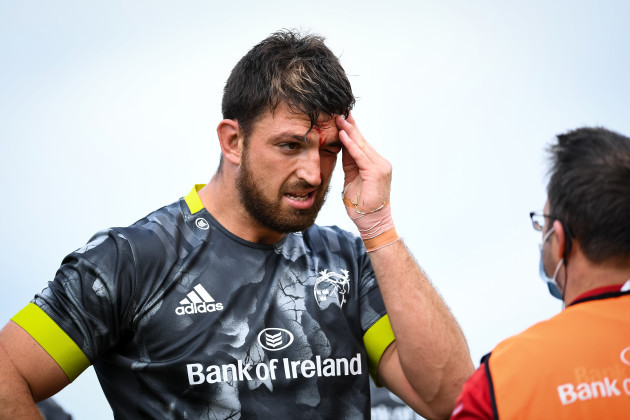 Billy Holland’s retirement means Munster have lost their most experienced lock option but they have welcomed the very promising 21-year-old Thomas Ahern and once-capped Springbok Jason Jenkins into their senior squad this summer.

Jenkins also plays in the back row and is expected to bring additional size and ball-carrying grunt to the Munster squad following the loss of number eight CJ Stander, who has also retired.

More important than any new signing will be the long-awaited return of RG Snyman from a knee injury and skin graft procedures to treat burns. Snyman will naturally take some time to return to his best but he will be a game-changer for Munster when he does so. His size, athleticism, and offloading are major strengths.

Tadhg Beirne is now a Test-capped Lion and seems likely to remain Munster’s primary lineout caller. He can play at blindside flanker but has predominantly featured in the second row for the province.

Meanwhile, Jean Kleyn will be aiming to build on what was a good season for Munster in 2020/21. He is not as skillful as some of their other lock options but is combative and brings set-piece grunt.

23-year-old Fineen Wycherley finished last season by winning his first Ireland cap against the US and will also be determined to develop even further having added lineout calling to his skillset.

The promising Ahern is uniquely athletic and skillful, while he too has been working hard on his set-piece play. After some injury frustration last season, he will hope to demonstrate increased durability in 2021/22. 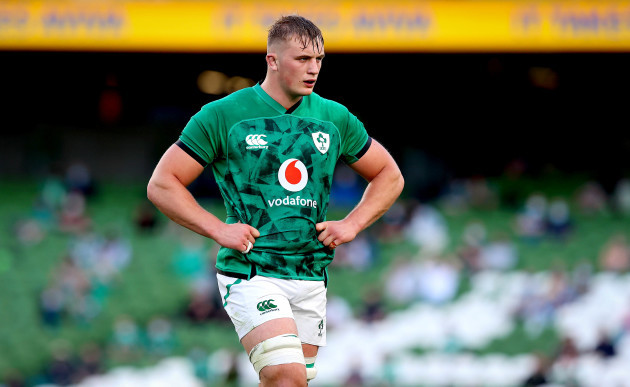 The retirement of Stander is an obvious big blow for Munster, with the Ireland international having been a remarkably consistent performer for the province.

However, Gavin Coombes’ brilliant campaign last season leaves him well primed to take over in the number eight shirt, having also won his first Ireland caps in July.

Captain Peter O’Mahony could feature in the number seven shirt, as he did at times last season, particularly given that Beirne and Jenkins are options at six as well as in the second row.

Jack O’Donoghue remains a highly consistent performer whose lineout and maul skills are a particular strength, while openside Chris Cloete is an outstanding breakdown threat even if his discipline can slip at times.

The promising John Hodnett is still on the comeback trail after an Achilles tendon injury but had shown his explosiveness before that setback, while Jack O’Sullivan improved with his five starts in the Pro14 last season.

With the stalwart Tommy O’Donnell having retired after years of great service, Kerry man Jack Daly has been promoted from the academy and will look to show his abrasive qualities if given chances. 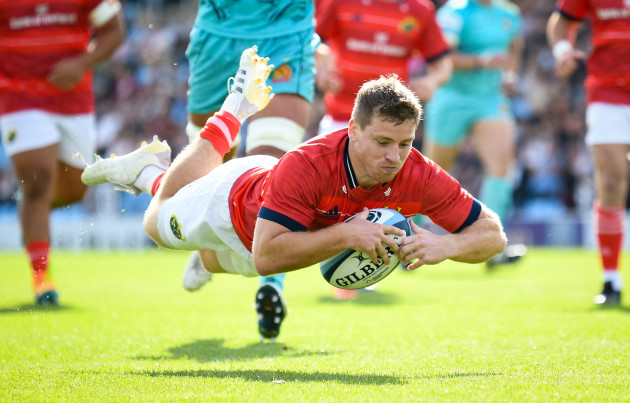 Neil Cronin is back from a long-term injury.
Source: Andy Watts/INPHO

Conor Murray had an up-and-down Lions tour over the summer but he remains the man in control of Munster’s number nine shirt. With his IRFU contract due to expire in the summer of 2022, the Limerick man will be out to underline his enduring quality.

22-year-old Craig Casey applied pressure with his sharp performances and leadership last season, while deservedly winning his first Ireland caps too. He brings superb passing and a high tempo to the team when selected.

Neil Cronin’s recent return from a long-term ACL injury was good news for the province and the Garryowen man will be eager to feature prominently, while Rowan Osborne has joined from Leinster after Nick McCarthy moved in the other direction. 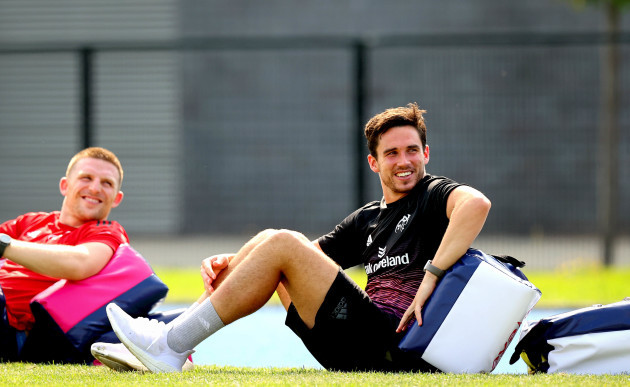 Joey Carbery is the main man at 10.
Source: Ryan Byrne/INPHO

Having made his Munster and Ireland comebacks last season and put his injury nightmare behind him, Joey Carbery will be aiming to drive his game to another level in 2021/22.

His creativity, place-kicking, attacking kicking, and line-breaking threats are all likely to be key for Munster, while he looks to continue his development as a tactical leader and defender – areas where Ireland rival Johnny Sexton remains the best.

With JJ Hanrahan having joined Clermont, Carbery is backed up by three talented young out-halves in Ben Healy, Jake Flannery, and Jack Crowley. Healy made 17 appearances last season and showed his impressive composure on a number of occasions.

Flannery and Crowley – who turned down a move to Ronan O’Gara’s La Rochelle to stay with Munster – both have real playmaking promise and also provide some versatility with their ability to play at fullback and even inside centre. Van Graan and co. have an intriguing challenge in ensuring Healy, Crowley, and Flannery all get sufficient game time in order to develop. 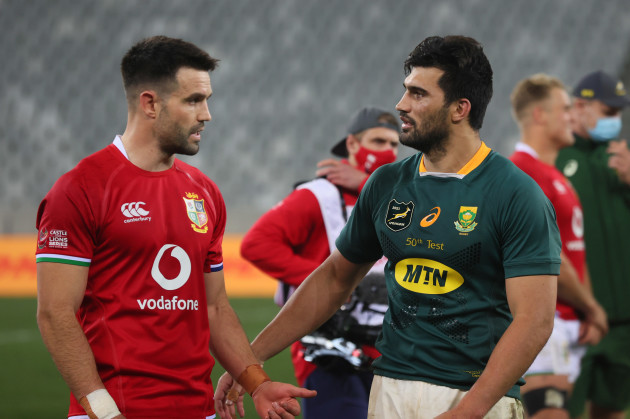 There has been no change to Munster’s midfield options over the summer, with Damian de Allende and Chris Farrell – another who is currently injured – set to continue as the first-choice pairing when available for the biggest games.

De Allende remains on Springboks duty and is unlikely to be seen much until after the November Tests, but Rory Scannell is a highly reliable and experienced option at inside centre.

Dan Goggin is a powerful presence in both midfield slots, while 23-year-old Alex McHenry will be eager to impress after playing just twice for the senior team last season. 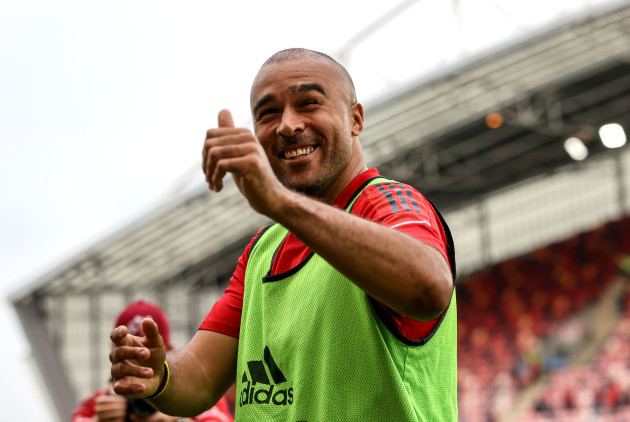 Simon Zebo is back with his native province.
Source: Dan Sheridan/INPHO

The return of Simon Zebo from France is the headline in this area and the 31-year-old is now part of a major battle for back three places.

Mike Haley has been a consistent first-choice at fullback in recent seasons but Zebo will hope to bring his inventiveness to the number 15 shirt. Meanwhile, ex-Saracens man Matt Gallagher will also be in contention at fullback as he hopes for an injury-free run.

Keith Earls had a strong campaign last season to earn a one-year IRFU contract extension and will need to be a big leader for Munster again as they look for a trophy. Similarly, 30-year-old Andrew Conway will be very keen to drive the province to success.

Shane Daly has two Ireland caps to his name but hasn’t quite managed to push past the likes of Earls, Conway, and Haley in recent times.

24-year-old Calvin Nash has impressed during the two recent pre-season games, while Liam Coombes possesses thrilling pace. 22-year-old Sean French has been promoted onto a senior contact after making his debut last season.

Scrum-half Paddy Patterson has joined Year 3 of the academy after making two appearances while on loan from Leinster last season.

Ex-Ireland U20 fullback/wing Jonathan Wren has had his time in the academy extended due to injury issues holding him back but he is now sidelined again with a thigh problem.

Year 2 back row Alex Kendellen made his senior Munster debut last season and was superb as Ireland U20s captain, meaning there is major excitement among the province’s fans about his potential, while lock Cian Hurley also made a senior appearance earlier this year.

Three players have joined Year 1 of the academy, with powerful back row Daniel Okeke and tighthead Mark Donnelly also having featured for the Ireland U20s, while Ennis RFC product Ethan Coughlan provides potential at scrum-half. The aforementioned Loughnane is also set to join.