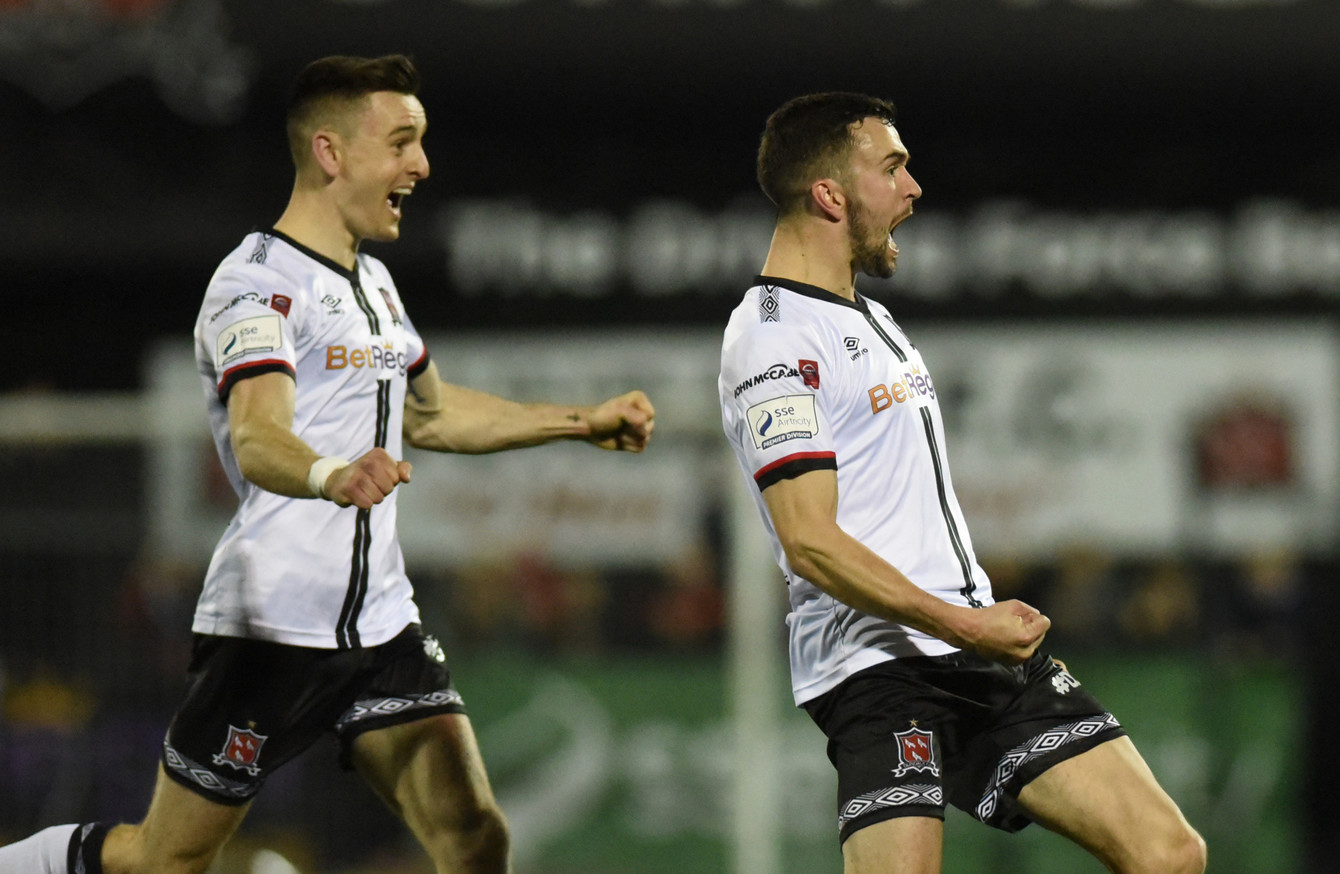 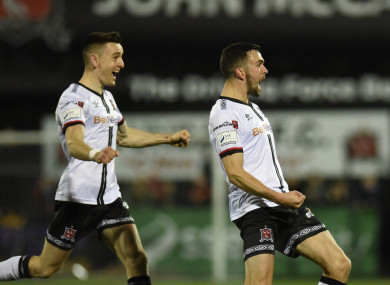 A RELIEVED DUNDALK booked their place in the semi-finals of the FAI Cup after they beat Finn Harps after extra-time in their quarter-final replay at Oriel Park tonight.

Vinny Perth’s crisis-stricken side looked as though they were going to be on the wrong end of another disastrous result when Sean Boyd put Harps in front in the early stages.

But, Sean Murray’s first-half equaliser was followed by a Patrick Hoban extra-time penalty before Michael Duffy sealed the win for Dundalk with a wonderful free-kick.

Absent for Dundalk were Alessio Abibi, Andy Boyle, Sonni Nattestad, Daniel Cleary and Sam Stanton; amid speculation that there was yet another Covid-19 outbreak at the club.

After pulling the original tie back to 3-3 in Ballybofey just four days beforehand, Harps arrived at Oriel with a spring in their step and started brightly, with Boyd – who scored two late goals in that game – putting Ollie Horgan’s side ahead after just five minutes.

From a long Ryan Rainey punt down the left-hand side, Dundalk’s tormentor took a brilliant first touch before unleashing it beyond the grasp of goalkeeper Peter Cherrie.

As was the case last Friday night, goalscorer Boyd was wreaking havoc, and he saw his free-kick attempt well gathered by Cherrie, while the Scottish veteran keeper got down well to save from Barry McNamee’s rasping shot as Harps went in search for a second.

Making his full debut in the Dundalk backline was Mayowa Animasahun, but the youngster was caught out by Tunde Owolabi, who then evaded the challenge of both Cameron Dummigan and Darragh Leahy before firing over the top of Cherrie’s crossbar.

Oriel erupted on 39 minutes as Dundalk found a much-needed equaliser through Murray, who calmly slotted home from Hoban’s acrobatic assist on the right.

Harps almost restored their lead on 64 minutes when McNamee’s corner was headed onto the post by Boyd before Cherrie pushed away from Owolabi’s follow-up effort.

In truth, neither side created too much in the way of chances after that, and after 180 minutes of football over the course of two matches, the game ascended into extra-time.

Hoban should have scored three minutes into extra-time when he planted a close-range header off target after getting on the end of an excellent floated delivery from Murray. The Lilywhites were awarded a penalty on 96 minutes when the menacing Sami Ben Amar was brought down by the outstretched leg of the experienced David Webster, and up stepped Hoban, who expertly dispatched despite Gerard Doherty guessing correctly.

Duffy sealed Dundalk’s place in Friday’s semi-final draw with a third on 105 minutes, curling a beautiful free-kick from just outside the box which gave Doherty no chance.

sports news October 19, 2021
John Feehan has praised the manner in which Basketball Ireland dealt with the issue surrounding his predecessor and has big plans for the sport...

Irish News October 19, 2021
A FORMER garda has been awarded damages of €150,000 for an incident that caused him such psychological strain that he had to quit the...