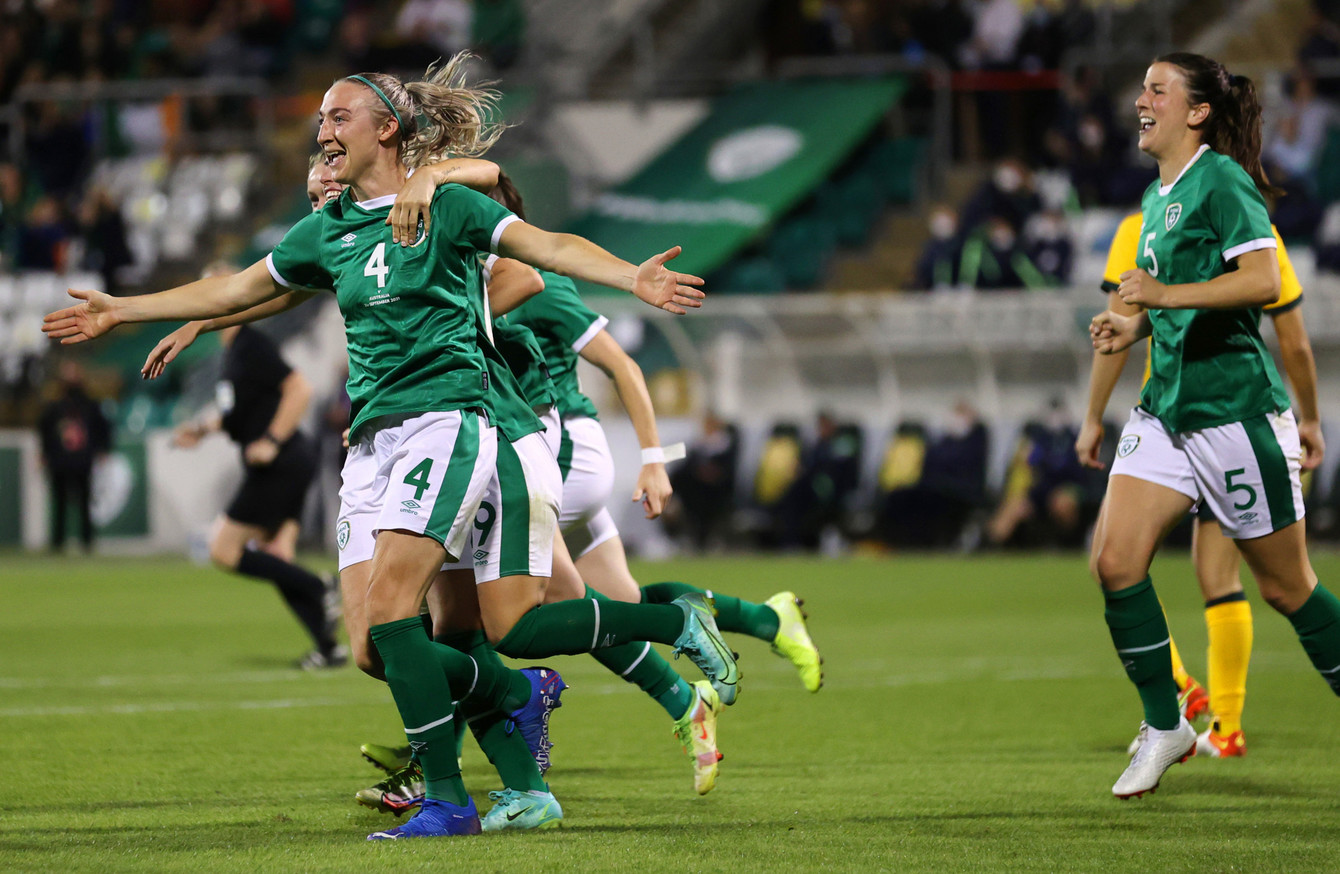 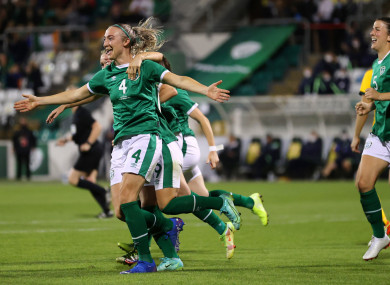 TWO L QUINNS combined to help the Republic of Ireland back to winning ways as fans returned to Tallaght Stadium for tonight’s women’s international friendly.

English-born debutant Lucy Quinn — though it likely goes down as an own goal — her Birmingham City clubmate Louise Quinn and the ever-impressive Denise O’Sullivan scored the goals, as the Girls In Green ended a seven-game losing run against a team ranked 22 places above them in Australia.

It comes as a much-needed boost for Vera Pauw’s side in their final run-out before the bid to reach a first-ever major tournament – the 2023 World Cup in Australia and New Zealand – begins once again next month.

The disappointment of the Euro 2022 qualifying campaign was well and truly put to bed tonight, albeit against a weakened Australia side after their Olympic exploits.

Louise Quinn enjoyed a Player of the Match-winning display, keeping tabs on Sam Kerr. Before a ball was even kicked, it was a landmark night for the Matildas captain and Chelsea superstar. She was to become a centurion; their all-time leading scorer winning her 100th international cap in Dublin, with the 50-goal mark within touching distance too.

Ireland spoiled the party, however, backing up recent positive developments, like pay parity and the Sky deal, on the pitch as they won for the first time since March 2020.

All defeats came at the hands of higher-ranked opposition as Pauw implemented a performance = result strategy. That said, they hadn’t scored in five of those seven losses, with basic errors often hampering them, so pressure was to ratchet up a notch tonight.

It was billed a sellout show, as Irish fans watched Pauw’s side in the flesh for the first time since the Covid-19 pandemic hit. The atmosphere was electric, but the 4,000 capacity amidst restrictions was not met. 3,314 was the official figure.

Pauw’s squad selection was hindered due to a high injury toll and other issues, though tonight’s XI was still a strong one. English-born Birmingham City attacker Quinn was catapulted in to lead the line on her debut, with Galway defender Savannah McCarthy coming into defence to end a five-year wait for her sixth senior cap.

Ireland’s own centurion, Áine O’Gorman, and Liverpool captain Niamh Fahey, also came into the rearguard, with Diane Caldwell dropping to the bench. And Everton’s Courtney Brosnan started between the posts as competition in the goalkeeping department remains through the roof.

The game wasn’t yet three minutes old when Ireland did what they struggled to for so long: get the ball in the back of the net. The provider? Lucy Quinn. A player who waited five years to have her eligibility confirmed, and who Pauw enlisted to score goals.

Disappointingly, it will go down as an own goal; the free-kick she won ricocheting off the post and then Aussie goalkeeper Mackenzie Arnold to make it 1-0.

Ireland threatened before that, too; Quinn a lively down the right before sending a ball across the edge of the box to Amber Barrett — deployed in midfield — who tested Arnold.

With the wind in their sails, Ireland settled into the game nicely, testing their 3-2-3-2 formation, finding joy from wing-backs Katie McCabe and Áine O’Gorman.

But 14 minutes in, they were pegged right back and it was all square. And like so often before, a goalkeeping error proved costly. 18-year-old Mary Fowler – who is indeed Irish-eligible and was approached by the FAI – had a pop; her shot fumbled by Brosnan, having gone through Louise Quinn’s legs, and proving her third international goal.

Both sides prodded and probed from there; Kerr at one end, Heather Payne at the other, and Ireland were very nearly 2-1 up when Alanna Kennedy’s headed clearance smashed off the upright after good work from Fahey and O’Gorman down the right.

That was the scoreline, however, on 23 minutes as the trend of messy goals continued. It all came from a McCabe corner, as Tameka Yallop’s clearance went straight to Denise O’Sullivan, who in turn, eventually found the net on her 85th cap after a deflection from Kyra Cooney-Cross.

An entertaining, open first half threw up a few more touch-and-go moments from Brosnan between the sticks, despite regaining her composure after the setback. McCarthy stepped up with a stunning double-block to deny Emily Gielnik and then Tameka Yallop, while Cooney-Cross saw an effort sail over as the break approached.

The hosts didn’t have just as many clear-cut chances, but Payne and Quinn did well hassling and harrying as they looked to hold their lead at the break. But just as the board for one minute’s added time was raised, Australia made it 2-2.

And, of course, it was another chaotic one: McCarthy’s headed clearance landing to Fowler, before her effort deflected off the scrambling Kerry native and beat the already-committed Brosnan.

Australia changed things up on their restart, their ‘keeper rotation notable as Lydia Williams assumed the mantle. Louise Quinn ensured she didn’t have the ideal start, though, the Birmingham City skipper meeting McCabe’s corner head on at the back post to land her 12th international goal and make it 3-2 in the 49th minute.

Kerr didn’t always have it her own way, and she limped off a knock, while O’Sullivan excelled around the middle, pulling the strings as always. Jamie Finn put in a massive shift, too, with Payne running herself into the ground.

Chants of “Ireland, Ireland” rang around the ground on the hour-mark, both sides struggling to get a foothold as Australia, in particular, made unforced errors in possession. Equipped with fresh legs, they continued to threaten.

Lucy Quinn departed in the 72nd minute to a rousing reception after an impressive debut, applauding the fans on her way around the stadium. Kerr saw yellow for a challenge on McCarthy just after, the home crowd cheering every time she was frustrated down the home straight.

Louise Quinn marshalled her well, and Ireland held firm despite some nervy moments and it was a night to remember in Tallaght.

Just in time for the next chapter, the journey to Australia and New Zealand 2023 belatedly beginning next month.