FORMER IRELAND RUGBY star Alison Miller says dressing room facilities should have been made available to teams for the women’s interprovincial games at the weekend. 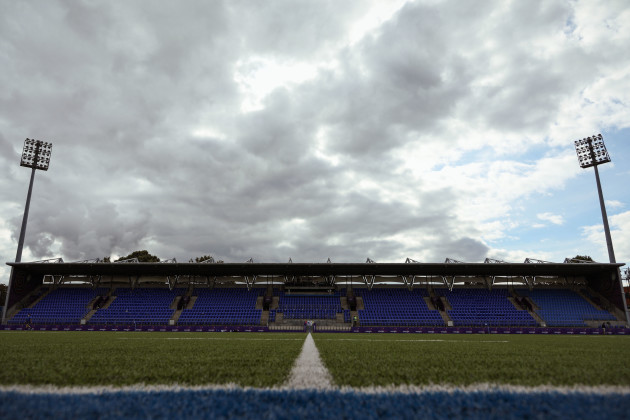 The interpros were held at Energia Park.
Source: Brian Reilly-Troy/INPHO

The tournament, which began at the end of August, concluded on Saturday as with a double-header at Energia Park. Munster emerged as champions after defeating Leinster while Connacht and Ulster played out a draw in the opening fixture of the day at Donnybrook.

All six games of the series were shown live on TG4 in what was a major boost for the game as it brought the Women’s Interprovincial Rugby Championship to Irish television for the first time ever.

But the competition ended on a sour note as footage later circulated on social media, appearing to show the Connacht team’s pre-match base located beside bins in a derelict area. Players added that rats were seen in the vicinity of their changing area.

The scenes triggered a major backlash online over the standard of facilities that were provided. The IRFU and Leinster Rugby issued a joint statement apologising for the “unacceptable error” and explained that the teams could not access the dressing rooms during the current Covid-19 restrictions due to their amateur status.

“My general take is the dressing rooms should have been allowed [for the players],” Miller tells The42 when asked for her general reaction to the incident.

“It’s a major competition, it’s televised, huge sponsor. Yes, ok, they’re classified as amateur but I think a special case has to be made for the interprovincials.

“Leinster, Munster, Connacht and Ulster play once a year. It’s not like it’s a week-in, week-out thing with the clubs. So, yes, they’re classified as amateur but could someone not have used… Look, I’m not one for bureaucracy but I think a bit of common sense on this would have been better off.

“A lot of those girls are former international players as well. They’re not just rocking up at the weekend, they’ve put in weeks and months of training. A lot of them haven’t played since their club games [in] February 2020.

Just got sent this

Absolutely disgusting and disgraceful that the Connacht women had to get changed with the rats for the #WomensInterpros today
I’ve walked lyrical about this tournament but to see this I’m horrified
I’m lost for words at this
Equally Saddened & infuriated pic.twitter.com/Wh1cvBQbdg

“There is enough room around Donnybrook not to have a tent put up beside bins,” Miller added. “There’s a load of rubbish in the back and derelict looking pieces of wood or whatever it is.

“It doesn’t make any sense.”

Miller — who retired back in 2019 after a 10-year career — said the hygiene-related issues in the footage are particularly harrowing to see in the context of the Covid-19 pandemic.

She also pointed out that players were returning to their team buses after their respective games without being able to access the shower facilities.

Referring to the statement from the IRFU and Leinster Rugby, Miller feels they were unclear about what exactly they were apologising for.

“It doesn’t really say anything,” she begins in her summary of the statement.” I suppose it’s PR. What was the unacceptable error? Was it that someone mistakenly put the tent up in the wrong area? It doesn’t say what the error is.

“It doesn’t say a whole lot. It just apologises and that’s that. There won’t be anymore said about it either because it’s just bad publicity and they don’t want that.

“Is it an unacceptable error of judgement maybe? I just don’t understand. Nowadays, people and organisations have to be really careful with everything they do because everything is captured on your phone so did someone not look at that and say, ‘This doesn’t look good?’”

That disappointing episode for women’s rugby was followed by a shock defeat for Ireland against Spain in their opening game of the World Cup 2021 Qualifier tournament last night.

Adam Griggs’ side lost out by 9-8 to an outfit who are ranked one place below Ireland on World Rugby’s official list. That shock result leaves Ireland facing a tough battle as they face Italy and Scotland in their remaining ties.

Miller feels that the interpros were scheduled too closely to Ireland’s World Cup qualifiers.

“Why not have it a bit earlier so the Irish girls could play? From what I saw of the game, I think they looked undercooked last night, looked like they were lacking game time. There’s no replacement for competitive games to get that hard edge, especially in a contact game like rugby.

“Also, it’s a bit disillusioning for players that weren’t on the Irish squad and were going into the interpros in good form and felt they could show off to the Irish selectors and could maybe get a place. But it was too late because the squad was already picked before the end of the interpros.