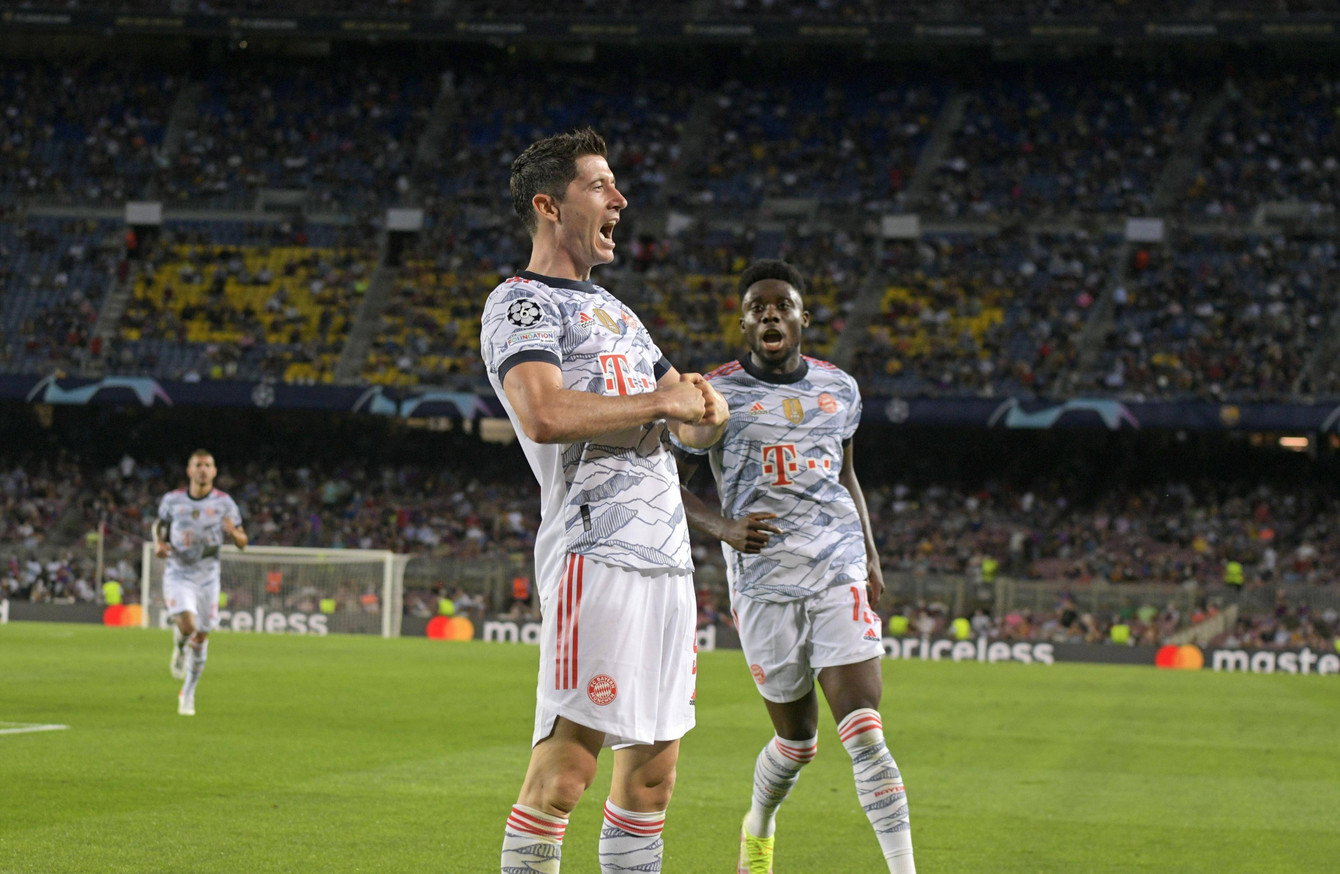 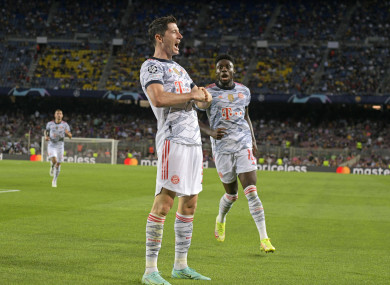 BAYERN MUNICH GAVE Barcelona a brutal demonstration of how far the Catalan club has fallen by strolling to a 3-0 win in the Champions League on Tuesday, with Robert Lewandowski scoring twice in a rout at Camp Nou.

Without Lionel Messi for a first European campaign since 2003, Barca were outplayed by Bayern, who might have scored more but in the end settled for three thanks to Thomas Mueller’s deflected opener and Lewandowski’s double.

When Lewandowski made it two before the hour, the possibility of another humiliation in the mould of last year’s 8-2 defeat by the same opponents in Lisbon felt very real.

Instead, Bayern delivered perhaps an even louder message about the gulf in class by easing off in the latter stages, as Barca’s fans expressed their anger, dismay and finally a sense of resignation. Their side didn’t register a shot on target over the duration of the game.

Sergi Roberto was on the end of the loudest whistles from the home supporters and it was impossible not to wonder if the criticism came in part from disappointment at the lack of progress down the right flank, where Messi once created so much.

Ronald Koeman’s position has come under scrutiny in recent weeks and his 5-3-2 formation, that defies Barcelona’s attacking traditions, will not have strengthened his hand.

Yet the bottom line here was the lack of quality in the Barcelona line-up, coming after their turbulent summer of sales, which was inferior to Bayern’s in every department.

Mueller has scored seven goals in six appearances now against the Catalans while Lewandowski has scored in 18 consecutive matches.

Julian Nagelsmann’s strong start as coach continues – this was a sixth consecutive victory – but he will know Bayern will face tougher Champions League opposition than this.

In true underdog fashion, Barca flew into Bayern early on, eager to impress themselves physically on an opponent they perhaps knew would be technically superior.

The crowd were in on it too, cheering as Luuk de Jong outmuscled Alphonso Davies and Sergi Roberto held off Dayot Upamecano.

There was then a hint of a chance when Memphis Depay slid De Jong but he lacked the speed to capitalise and Benjamin Pavard cleared.

The early enthusiasm could only sustain Barcelona so long and as the game settled, gradually Bayern took control.

But Bayern’s authority was set, even if their opening goal owed a lot to fortune, Mueller unleashing from 30 yards and the ball diverting off the back of Eric Garcia, wrongfooting Ter Stegen and creeping inside the post.

Barca wilted before half-time, the atmosphere turning sour as passes went astray and attacks broke down.

Sane hit the right foot of Ter Stegen from eight yards and then Lewandowski made it two, studding the ball into an open goal after the Barca keeper committed to Jamal Musiala’s shot that cannoned off the post.

Under threat of another thrashing, Koeman took off Sergi Roberto and Busquets, to a chorus of whistles from the home fans. The 18-year-old Yusuf Demir and a 17-year-old Gavi came on.

Yet Bayern spared Barca a humiliation, waltzing through for one more late on as Lewandowski danced through a sprawl of bodies and fired with five minutes left. For Barca, three felt like a relief.

Elsewhere in the same group, Dynamo Kiev had to settle for a 0-0 draw at home to Benfica after Ukraine international Mykola Shaparenko’s injury-time effort was ruled out for offside.

Vera Pauw: ‘We are getting closer to our goal and I promise you it will happen’

Irish News September 22, 2021
Winning a gold medal at the Chelsea Flower Show has been the fulfilment of a life-long dream for Kerry-based horticulturalist Billy Alexander. Source: Irish News {$excerpt:n}