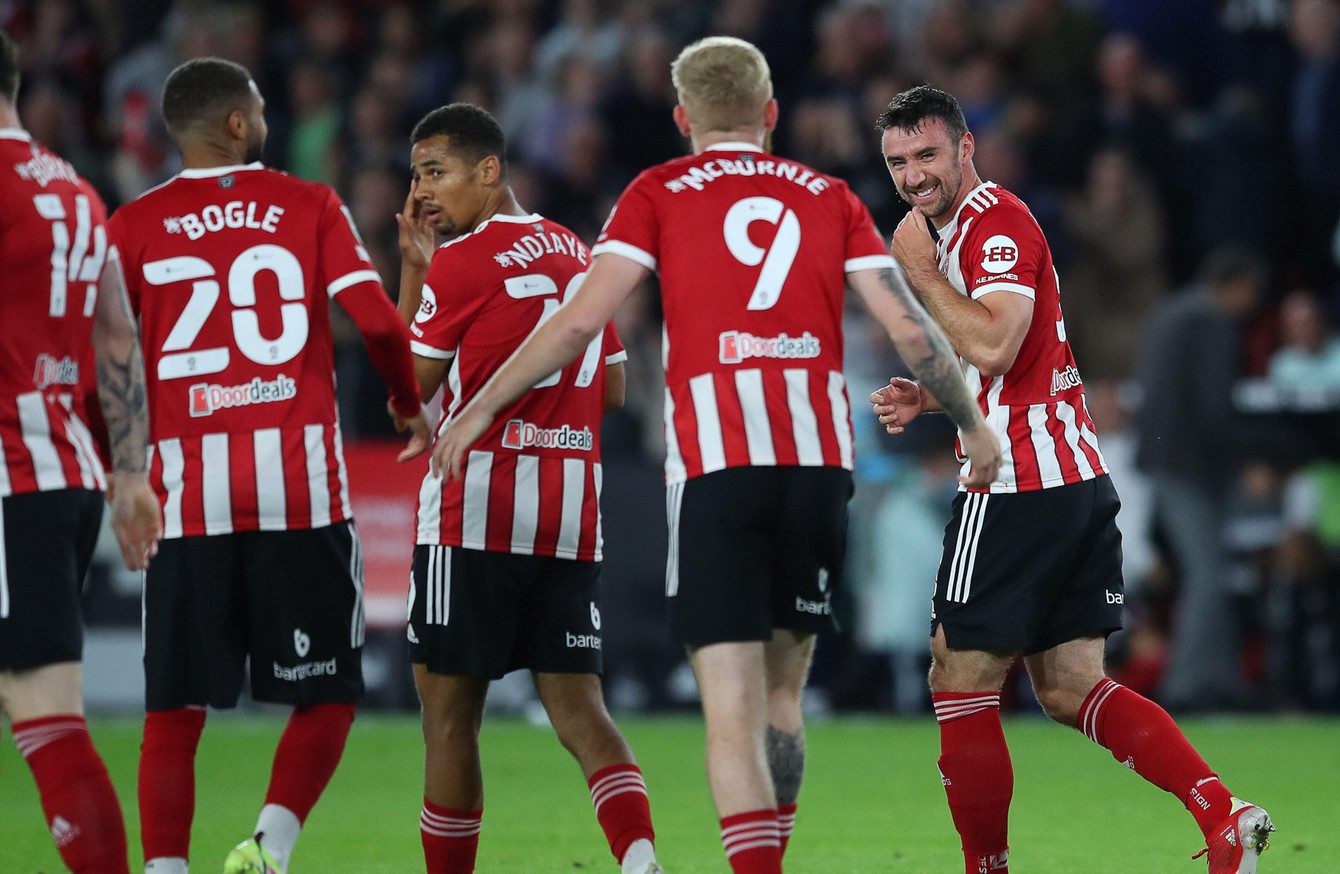 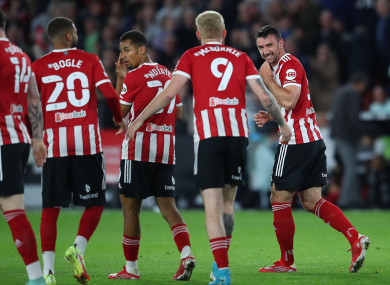 IRELAND INTERNATIONALS ENDA Stevens and Sean Maguire were both amongst the goalscorers in the Carabao Cup tonight but endured contrasting fortunes.

Stevens marked his return from injury for Sheffield United and first appearance of the season with the opening goal after eight minutes but strikes from Ibrahima Diallo and Mohammed Salisu for Southampton turned the game on its head.

McBurnie levelled things up for the Championship side and a superb save from Wes Foderingham to deny Che Adams late on saw the tie go to penalties.

There Fraser Forster saved spot kicks from Rhian Brewster and Oli McBurnie as the Premier League club progressed 4-2 on penalties, following a 2-2 draw after 90 minutes at Bramall Lane.

Sean Maguire and Emil Riis struck late as Preston put the seal on a 4-1 win over Cheltenham.

It was the first ever meeting between the two teams and a first appearance in a Preston shirt for Connor Wickham but his debut lasted only seven minutes before he limped off the park, replaced by Maguire.

Preston were ahead 2-0 at half-time through Andrew Hughes and Joe Raffery before Kyle Vassell replied for Cheltenham Town. Maguire made it 3-1 in the 82nd minute before Riis scored late on.

Everton crashed out of after losing on penalties to Sky Bet Championship side QPR.

After the 90 minutes ended 2-2, Rangers scored all their spot-kicks, prevailing 8-7 in the shoot-out.

Defender Jimmy Dunne thumped in the winning penalty after Tom Davies’ kick had been saved by goalkeeper Seny Dieng.

In an entertaining third-round tie, Charlie Austin netted twice for QPR in the first half, opening the scoring and then restoring their lead after Lucas Digne’s equaliser.

Andros Townsend hauled Everton level again a couple of minutes into the second half.

Cole Palmer’s first senior goal for Manchester City put the final flourish on a comfortable 6-1 win over Wycombe as key players shook off some rust and young debutants made their mark.

Sky Bet League One side Wycombe snatched a shock 22nd-minute lead through Brandon Hanlan but that was a distant memory by the final whistle, with Riyad Mahrez scoring twice alongside strikes from Kevin De Bruyne, Phil Foden and Ferran Torres to banish some frustrations from Saturday’s 0-0 draw with Southampton.

Leeds won 6-5 in a penalty shoot-out to come out on top in their clash with Fulham at Craven Cottage.

Neither side had been able to find a breakthrough in normal time, and after five penalties each there was still nothing to separate the sides with both successfully converting three apiece.

Teenager Stuart McKinstry scored for Leeds to make it 6-5, but Fulham’s Rodrigo Muniz was unable to convert, leaving Leeds to progress.